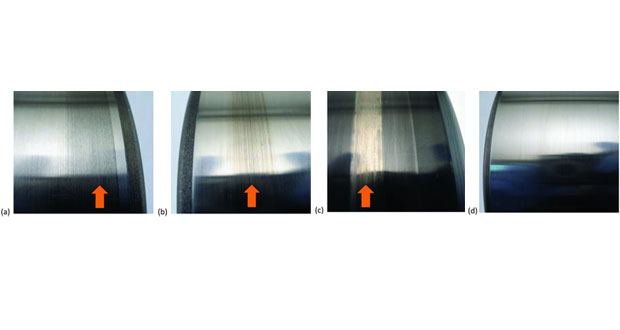 Recent research conducted by the Timken Company has shed light on the root cause of smearing damage to turbine gearbox bearings. 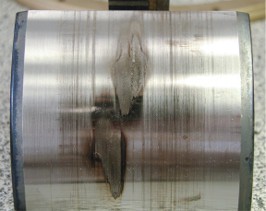 Causes for the smearing were not well understood and researchers, up until now, were unable to reproduce the damage on to-scale cylindrical roller bearings (CRBs) in laboratory settings. Ryan Evans, manager of engineering fundamentals and physical testing at Timken, led a team of researchers in trying to replicate the damage in their own way.

“It took us a few months and some creative test-rig settings and instrumentation to determine how to generate the smearing damage,” said Evans. “In addition, we recognized the importance and value of measuring key bearing dynamic attributes like cage slip in real time.”

Smearing damage was created on test CRBs by alternating the load zone direction according to a square wave function, which is described in Evans’s research paper.

“We took it a step further and were able to model the test conditions using the Timken CAGEDYN dynamic model, which led to a proposed ‘smearing criterion’ that can be used to assess smearing risk in other bearings and dynamic situations,” Evans explained.

The team’s research ultimately proved that erratic load zone conditions contribute to smearing damage. Multiple sources point to the same mechanism as an explanation for not only smearing, but also other types of bearing damage in real wind turbines, Evans added.

The research conducted by the Timken Company earned them the 2015 Wilbur Deutsch Memorial Award from the Society of Tribologists and Lubrication Engineers (STLE). Evans and three other researchers co-authored the award-winning paper that presented the results. They are Todd Barr, principal product development engineer, based in North Canton, Ohio; Steve Boyd, senior application specialist – product, also based in North Canton; and Luc Houpert, senior scientist – product, based in Colmar, France. Their research underscored the value of Timken wear-resistant bearings in helping to prevent smearing damage to turbine gearbox bearings.

To learn more about the results of the Timken research paper, visit www.tandfonline.com. 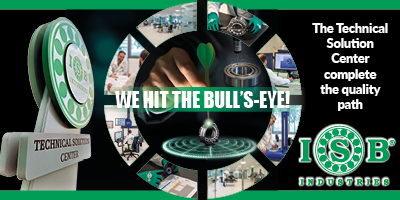