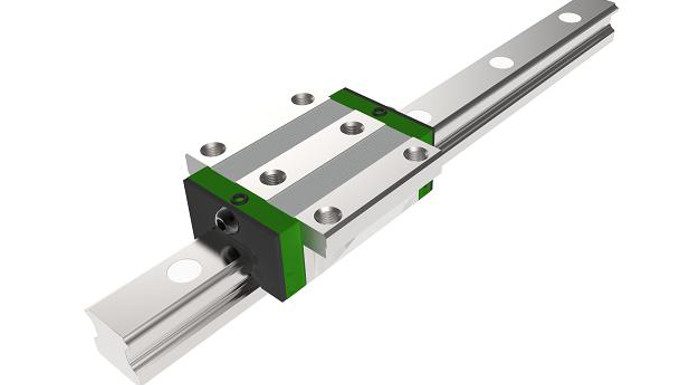 Sutton Coldfield, UK, April 2017. The infeed zones in linear recirculating ball bearing and guideway assemblies, i.e. the area in which the rolling elements are guided into the load-carrying element until the load is fully applied, are critical factors for life-limited components. These zones ensure that the load is gradually rather than abruptly applied to the rolling element. By improving the design of the infeed zone on the carriage saddle plates, Schaeffler has now succeeded in increasing the load ratings for six-row KUSE linear recirculating ball bearing and guideway assemblies by up to 44%, depending on the size and design. As a result, the rating life is three times higher than that of conventional designs. Due to the significant increase in performance, the redesigned KUSE series has been awarded the Schaeffler X-life quality mark.

Up to 83% reduced pulse amplitude

Six-row linear recirculating ball bearing and guideway assemblies in X-life quality have a high level of rigidity and extremely low pulse amplitude. They can now also be used in applications where vibration levels must be kept to a minimum and where very high accuracies are required, for example, in measuring machinery. In general, the recirculating rolling elements prevent a constant number of fully loaded rolling elements being present in the load zone of the carriages. Depending on the effective number of rolling elements in the load zone, the carriage balances deflections along the stroke to varying degrees. This causes a slight, pulsing equalising movement in the load direction of the carriage. This kind of movement is called “stroke pulsation”.

Pulse amplitudes of up to 1 µm (peak-to-peak) for a single ball are not uncommon. For the new KUSE X-life guidance systems, the contour of the infeed zone has been optimised in such a way that the stroke pulsation is considerably reduced, particularly at higher loads. For example, at a load of 1.35 tonnes, the pulsation amplitude is less than 0.1 µm – a reduction of 83%.

The highest rigidity and load carrying capacity based on balls

KUSE X-life linear recirculating ball bearing and guideway assemblies offer one of the highest rigidity levels and load carrying capacities based on balls for any monorail guidance system currently available on the market. Instead of the usual four rows of balls, six rows of balls support the loads: four rows of balls support loads in a compressive direction with a contact angle of 45°, while two rows of balls support tensile loads. To increase their load carrying capacity, these two rows of balls have a higher contact angle of 60°. Lateral loads are transmitted by three rows of balls. This specific arrangement of ball rows, which is a combination of an ‘X’ and ‘O’ arrangement with 45° and 60° contact angles, makes KUSE X-life designs perfect for combined load directions. Compared to four-row linear recirculating ball bearing and guideway assemblies, the combined rigidity can be increased by 15% on average. In combination with the very low stroke pulsation, KUSE X-life six-row linear recirculating ball bearing and guideway assemblies are particularly suitable for high precision applications in electronics production, mould production, microscopy, and optics, as well as for applications that require a high load carrying capacity and operating performance.