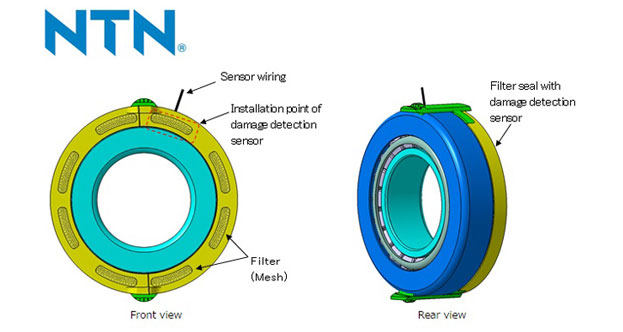 NTN Corporation (hereafter, NTN) has developed “Tapered Roller Bearings” with an early failure detection function which can detect flaking that occurs on bearings during operation.

Continuous use of bearings with flaking failure leads to a risk of damage to peripheral components such as the shaft and housing due to abnormal bearing rotation. Furthermore, this will also cause secondary damage such as damage to gear parts when flaked fragments from bearings are dispersed and become stuck in the gears. Therefore, when flaking occurs on bearings, it is best to stop operation promptly. However, until now, it was difficult to detect flaking on bearings because it was undetectable due to the vibrations or noise of the entire machine.

On the other hand, it is necessary to have a replacement period for bearings as long as possible to reduce the life cycle cost of the machine. However, because the risk of bearing damage including secondary damage increases the longer the replacement period, so that the actual bearing replacement period is usually set to a much shorter period than the expected operating life of bearings from the perspective of risk reduction.

NTN has developed a product that prevents flaking fragments from being discharged outside of the bearing by installing a filter seal on the outer ring, which is a stationary ring on the tapered roller bearings, and by optimizing the clearance between the inner ring and filter seal. Also, by optimizing the sensitivity of the damage detection sensor attached to the filter seal, NTN has achieved a technology that can detect whether flaking only has occurred at an early stage without detecting fine iron powder or suspended metal particles. In addition, the filter seal has a special construction that also allows it to be retrofitted to existing tapered roller bearings.

NTN will propose this technology over a wide area for tapered roller bearings used on machines in the general industry and continue to contribute to reducing the life cycle cost of machines.

Application of the product
Construction machinery