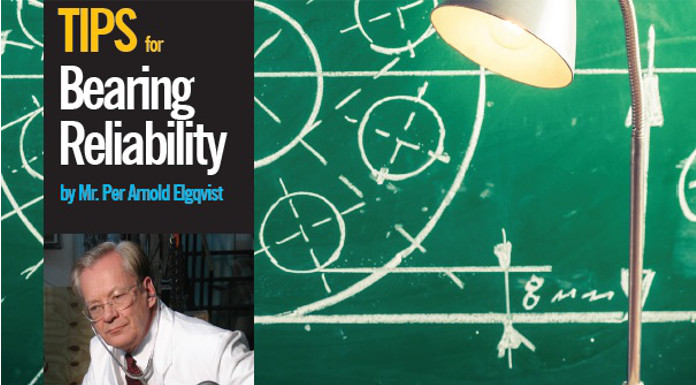 The costs of rolling element bearings are insignificant compared with the costs caused by their failures. 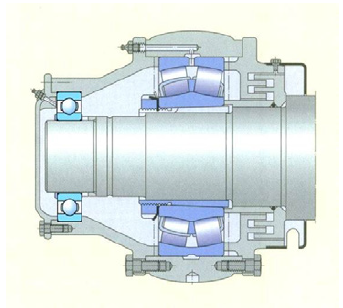 The total costs caused by bearing failures are in most cases enormous. Especially when you as you should take in account the value of the production that was not produced due to downtime caused by the failure. In most reports I have seen the cost only include the costs for the repair when the value of the lost production may be 10 or up to 100 or more times higher. Let’s look at a simple example: The failures of deep groove ball bearings 6210 in felt rolls in a paper machine as shown in the figure below.

These bearings should only function as guide to avoid excessive misalignment of the spherical roller bearings during the handling of the roller and all the load should be taken up only by the spherical roller bearing. In this case it was decided to increase the speed of the machine and thus the tension of the felt was also increased accordingly in such a way that the increased misalignment of the roller caused heavy unexpected loads on the deep groove ball bearing causing premature failures. The cost of each bearing was 50 USD. According to the plant manager each failure caused 2 hour downtime with a total cost of 15,000 USD per hour due to the lost production. Thus a relation of 50 to 30,000! This was in an old machine so just imagine the cost in a modern machine, as for example the largest machined manufactured so far that produces 28,000 tons per day. So I’m sure there are even much worse examples! In this case I recommended replacing the bearing by a simple bushing with the diameter big enough to avoid an excessive misalignment of the spherical roller bearing but a clearance enough not to touch the housing duringoperation. The cost: 20 USD!

Conclusion: Always look for the total costs for the failures.

Wrong Bearings = the 2nd mayor cause for Bearing Premature Failures!

My experience on the field has shown wrong bearing to be the second mayor cause for premature failures! Why so?

It is clear to me that the lack of knowledge in bearing designation is the reason for most of these mistakes. Just look at the example below: The catastrophic failure of the thrust bearings in an API centrifugal pump in a refinery. The designations of the 2 bearings made evident that these had not been adjusted for mounting in pair which had led to an incorrect thrust preload in between the 2 bearings originating a heavy overload. These bearing should have had the suffix UA indicating the required adjustment made by the manufacturer.

1. Wrong internal clearance. I use to ask what C3 means as I start my training courses and my experience is that most of the participants do not know and a correct internal clearance is most critical for the correct function of bearings.

2. Wrong type of integral seals. It is a most common misunderstanding that shielded bearings (-2Z or ZZ) are sealed which they are not: There is a small opening in between the metal shields and the inner ring to avoid contact, which allows the lubricant to leak out and contamination to enter the bearings. Bearings provided with contact seals are almost hermetic and are the indicated to perform correctly in contaminated environments. Just look at the different contamination factors the ISO 281 assign: 0.5 for the capped bearing and 0.85 for the sealed bearing.

Utilize the “Tribological Formula” to increase the lives of rolling element bearings!

I have called the ISO 281 edition 2000 (and later) formula shown below for calculating bearing life the Tribological Formula.

As Tribologists we talk about 3 main types of wear:
1. Fatigue or spalling.
2. Adhesive wear.

This formula for calculating bearing life takes in account the aISO factor. This factor takes in covers the causes for the 3 types of wear indicated above:

cause 1:The relation in between the applied load and the fatigue load limit for the corresponding bearing.
cause 2: The lubrication conditions, mainly the Kappa relation i.e. the relation in between the actual viscosity of the lubricant and the minimum required viscosity to avoid metal to metal contact.
cause 3: The contamination as regards solid particles expressed as ISO 4406 code, i.e. the quantities of particles larger than 4, 6 and 14 microns per ml. of the lubricant.Before the publication of this formula we talked about the “severe damages” ofsolid particles, but unable to quantify “severe damages”. Now we have an official tool to quantify this type of damage and the fact is that its enormous effects surprised most of us. Just imagine, this factor axyz may have a value from almost 0 (zero) to 50 that is the upper limit. Up to 50 times the previous calculations! 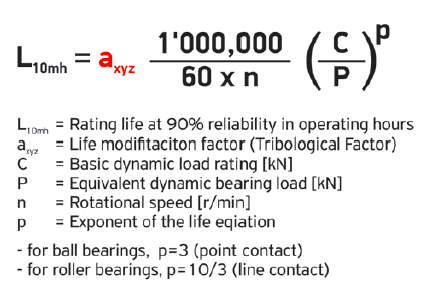 As just one example I can mention that the contamination factor for open bearings being re-lubricated is 0.25 and this factor for factory lubricated and sealed bearings is 0.85! Conclusion: Use as many sealed bearings as possible! The latest 2007 edition of the ISO 281 indicates:“Below a certain load, a modern high quality bearing can attain an infinite life, if the lubrication conditions, the cleanliness and other operating conditions are favourable”. What an opportunity!

Do not systematize the errors in your CMMS Program!

The CMMS (Computerized Maintenance Management System) Programs are excellent as long as you guarantee the quality of the information you feed into them.

These systems can be outstanding as information sources when you need to repair equipment. If you use it as it is intended you can have all the necessary information in seconds at your finger at the system terminal: All the spare parts needed for the repair (bearings, seals, components, etc.), the required mounting tools and tolerances for the fits, the correct adjustments (axial clearances or preloads) and lubrication data (lubricants and quantities).

– Excessive stocks in the warehouses.

Just to show you an example: A failure of an API centrifugal pump showed to be caused by a wrong bearing so I asked to see the information in the SAP System at the client. The correct bearing should have been a 7310 BECBM in the SKF brand or its correct equivalents in other  brands.

In the following table you can see what I found. The bearing that should have been only one (SKF Ref. 7310 BECBM) was indicated as 12 different SAP numbers and not one single of them was correct! Some missing the suffix indicating the required adjustment for mounting in pair and not one single with the correct machined brass cage as indicated by the API 610/ISO13709. In my experience the lack of knowledge in bearing designation is the reason for the 2nd largest cause for bearing failures: Wrong bearings.

The optimum seal, the triple barrier!

The most usual way to avoid contamination to enter the bearings is by using intensive re-lubrication with grease. In several occasions I have recommended so called triple barrier protection:

1. Replacing the open bearing by capped or sealed bearing.
2. Filling the bearing housing100% with grease.
3. Outer seal being a V-Ring or efficient labyrinth. 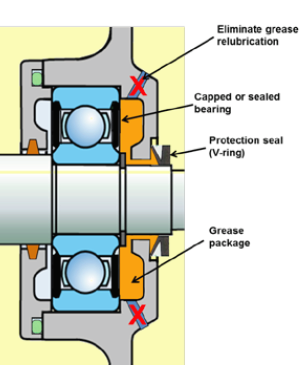 See the figure below:
I can mention 2 examples:

example 1: Blowers in the open at copper mines up in the mountains in South America. Service life increased from 6 months to over 2 years.

example 2: Electrical motors in the basement of paper mills. These even survived also electrically being totally flooded. And in both cases these equipment had become maintenance free!